This stub [1] has been written as a possible trigger for collaborative research on "Sweden and the Andean world in the eighteenth century". These materials may have use in, for example, a history of Swedish-Andean contact / relations / migration etc and would be particularly important to the education of South Americans (e.g. Ecuadorians) in Sweden - and vice versa. It could also be noted that La Condamine disseminated knowledge of rubber technology and quinine (red bark) anti-malarial medicine, then utilised in Ecuador but not (to any extent) in Europe.

The idea is to tease out cases where the history of Sweden has touched that of the Andean world and vice versa. N.B. Andean refers to all in the Andean countries not solely to "Andeans" or "Indians". 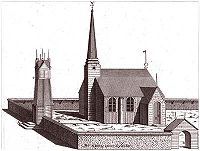 Church at Tornio, Sweden. This, now famous, church provided one of the base coordinates for the arc measurement."They measured a meridian arc of approximately one degree's length – about 111 km. The south end of the arc was at the tower of the church of Tornio, the north end was at the hill of Kittisvaara. By measuring the length of the arc, Maupertuis' team was able to prove that the Earth is, indeed, flattened at the poles as Sir Isaac Newton had predicted."

Note: the date code 080906 indicates that this article is still in "incubation". Commas and colons have been omitted from the internet title to avoid virtually unreadable URL(internet) addresses. When moving this page to its "post-incubation full page" use a title which is immediately understandable by the average reader and includes important key words. Avoid commas and colons, etc!

This is a stub onlyEdit

A stub is an initial piece of text, intended to get the collaborative editing off the ground. This space is intended for information/articles referring to (any) common history between Sweden and Ecuador.

Anders Celsius and the scientific missionEdit

The expedition to Torne Valley was led by Pierre Louis Maupertuis. As Swedish representative, professor Anders Celsius joined the team. The expedition arrived in Tornio on June 19, 1736 and headed back to France on June 10, 1737 [5]. They measured a meridian arc of approximately one degree's length – about 111 km. The south end of the arc was at the tower of the church of Tornio, the north end was at the hill of Kittisvaara. By measuring the length of the arc, Maupertuis' team was able to prove that the Earth is, indeed, flattened at the poles as Sir Isaac Newton had predicted.

Travel guide to the Torne part of Sápmi?Edit

The books describing this trip, written by Maupertuis [6] and Réginald Outhier [7], have given us much information about the nature and culture of 18th century Sápmi (Lapland), and the books have inspired many travellers to head to the Torne Valley.

No other relation between Sweden, Ecuador (and France) at that time?Edit

Of course, but this is a stub. Please add new sections (enclose with =text: heading=) and/or paragraphs (===text: heading===) below. If necessary create a new article. This does not have to be highbrow or academic: categorise your article at the right level in order to attract appropriate readership and deflect irrelevant criticism, e.g. that your article is not sufficiently "post doctoral" when it wasn't intended to be.

How to construct footnotesEdit

Until we get better software - this is how you do it. The wikispaces option currently does not offer the possbility of footnotes. Immediately after the word you wish the footnote to refer to INSERT FOOTNOTE TEXT as follows (ref name="can be any word")Text of footnote(/ref). BUT brackets "(" should be pointed "<". For example footnote_example[2]. Click "Edit this page" to see background code). In the Footnotes section be sure to place the "references /" code again within pointed brackets.

Note* - An asterisk indicates that more or precise information is needed. Do not quote this phrase without checking other sources. Provide citation. N.B. asterisks at the start of a sentence will format it into a bullet list.

Retrieved from "https://academia.fandom.com/wiki/080906SWE?oldid=9052"
Community content is available under CC-BY-SA unless otherwise noted.