What level or category is an article?[]

This is an article in the "academia" domain of the collaborative editing “wikia” website. http://academia.wikia.com/wiki/090113GPP. The tags (etiquetas) at the base of this article indicate the categories to which the article has been assigned. Tagging and indexing convert the journal into a database. Other tags can be added, e.g. geophysics. See the OJPS page for a list of categories. http://academia.wikia.com/wiki/Journal_of_Peruvian_Studies. The Minkapedia (minka - Quechua: working together, pedia – clas. Greek: education) category is for “collaborative” educational articles akin to the contents of university lectures / classes, but written collaboratively! The difference between Minkapedia and Wikipedia is the difference between a university lecture/class/course and handout (separata) and an encyclopaedia article. Good advice: don't over-categorise because the article will receive undue academic criticism (e.g. don’t tag your article “for peer review” when it’s a nice little magazine number. If you are just starting up a new collaborative piece call it a “stub”) The category or tag is an indication to the reader about an article's academic level.

Peru is blessed and cursed by features of its geography and geology which have led to two special areas of research. These features are (a) its approximate position at the magnetic equator and (b) its vulnerability to earthquakes. Others could be added: some of the driest desert in the world, etc. However this article outlines the research being conducted in relation to (a) and (b), starting with the work of the Jicamarca radio observatory research station.

This section presents a film made by the US Department of Commerce - National Bureau of Standards (USDC-NBS), the partner organisation to the IGP (the Peruvian Geophysics Institute). Together they developed the original radio observatory on the Jicamarca site. The film is now over 40 years old. A few passages may strike the viewer as somewhat quaint, as might be expected, but overall it has stood the test of time and provides a very useful insight into the construction and development phase (and to aspects of the Peru of that era). The film has been split into 3 YouTube videos, subtitles added and the videos embedded below. A version in Spanish is available from the YouTube site. (If you are following the OJPS 1000 word English course – or just want to improve your English - a suggestion: stick with the English version and follow the English subtitles)

(00.00 to 03.00 minutes.)The first video explains why, in the 1960’s, scientific research was reaching out beyond the atmosphere and why the NBS was searching for a research partner (and site) on or near the magnetic equator. It explains why the research problems start around 300 kms from the Earth’s surface. At this distance short wave radio signals are reflected back to Earth (see video) – useful but this limits radio-based research into and beyond the ionosphere (see definition). The then relatively new rockets and satellites could help but provided only “snapshots”. A new research technique using scatter radar was developed but the USDC-NBS needed a site for the radar observatory.

(03.00 minutes) The video then provides a more technical explanation. It may help if you check out the concept of free electrons. Scientists wanted to know how far above the denser F-layer free electrons extended.

(05.08 minutes) Explanation of the incoherent scatter radar research techniques developed by Dr Kenneth Bowles and his team at the Boulder, Colorado Laboratories of the USDC-NBS: provides a facinating insight into the history of science at this point.

(06.47 minutes)The video now explains why a site near the magnetic equator was chosen – the chemical composition of the ionosphere could be measured more precisely.

(00.00 to 00.57) Explains various factors favouring Lima as the site for the research facility. The street scenes will be nostalgic for some. Note the tram (streetcar) lines. This was the time of President Kennedy and much of Latin America, including Peru, was politically closer to the United States. Some of the areas filmed, especially the city centre, have never really regained the prosperity which they had enjoyed until then. So this footage is fascinating for many reasons.

(00.58 minutes) We are introduced to Peru’s Instituto Geofísico and via a train journey on the Central Railway to the Institute’s observatory near Huancayo (also shown).

(03.05 minutes) Back to the coast to search for a specific site: dry, and protected from radio interference by surrounding hills.

(04.12 minutes) A treaty is signed between Peru and the US. Work is started August 1960. First the diversion dam to protect the site from sudden mud flows and flash floods.

(00.00 to 00.53) The transmitter. The training of Peruvian engineers and technicians.

(01.36 minutes) The capacitors (bank) have a capacitance of 1000 micro-farads. Can be discharged in a powerful electrical pulse rated up to 20,000 jules.

(01.46 minutes) The four red amplifiers used in the transmitter. Up to 6 million watts of radio frequency power.

(02.21 minutes) The water cooling system and the air cooled tunnels for cabling and coaxial “tubes”.

(Ab initio - no knowledge assumed) This section develops an education video. The embedded video explains in non-scientific language how the radio observatory works. If you feel the explanations are unsatisfactory add an improved version which you can do on screen. The graphics have been developed using the most commonly available software: Microsoft Word and MovieMaker. These files are provided for downloading as are the original jpg and movie files. Read "how to collaboratively edit a video" below.

Internal link for the video is C:\Users\ACER\Videos\Jicamarca\Jicamarca1 - without music.wmv - The external link or internet address is http://www.youtube.com/watch?v=2i30zgahyV0. The text of the information provided alongside the YouTube movie is as follows: This video briefly describes how the Jicamarca radio observatory works. The observatory is one hour east of Lima, Peru and is the only international research observatory on or near the magnetic equator. It is also one of the largest in the world. See article http://academia.wikia.com/wiki/090113GPP for context. Category: Education. Tags: Jicamarca Radio Observatory Peru Geophysical Research Instituto Geofísico IGP

Pages with text may be paused for the page to be read. When editing movies it is not necessary to allow full reading time for the frame. Use large font e.g. larger than 20 point.

The article in the public domain and copyright is “intellectual commons”. It is written, initially, for the collaborative education (minka-pedia) section of the OJPS.

If you are reading this on paper the essential contents of the video are included below as a series of photos with text.

The level of scientific knowledge of the reader-viewer is taken to be no more than the “average school-leaver” / first year generalist undergraduate. Please add HERE an additional explanation of any of the words, concepts, diagrams in the video that you find difficult. The chances are that others will also find them difficult: watts, ionosphere . . .

The original structures were built 1961 well outside the much smaller but still rapidly expanding city of Lima (since the time of my first visit 1972 its population has increased by 6 million: simply in terms of infrastructure an extraordinary achievement). Travelling inland to the east, the land rises up towards the Andes. Geographically the Jicamarca site lies in the initial foothills of the Andes and is not far from the Central Highway and the Lima-Huancayo railway. (Insert map)

The Jicamarca radio observatory was constructed in 1961 in a valley one hour east of Lima. The valley has a desert climate subject to rare flash floods called huaycos in Peru. A barrage or flood wall - marked A in the photo – has been built to protect the main buildings B and the 90,000 square meter antenna C.

The radio observatory conducts experiments on the ionosphere starting around 300 kilometers or 185 miles (The “100-200 kilometers” in the video’s sound-track should be corrected) from the Earth’s surface. Its main facility is a vast 90,000 square meter reflector-net or antenna looking a little like a strange vineyard in the desert.

Large amounts of electricity are taken from the commercial grid at A - the yellow dotted line - and converted into six million watts of radar signals in the “shed” B. The radar pulses are wáter cooled as they go on their journey to the transmitting net or antenna C. Beamed up 200 kilometers to the ionosphere they are bounced back and received - the red dashed line – back at X. Of course there are a multiple – or a continuity – of C and X points, depending on how many blocks of the antenna are switched on.

The signals from the ionosphere are monitored and analysed at Y (the northern end of the main building) before being sent – largely by internet (Z) these days – to scientists and other users round the world. 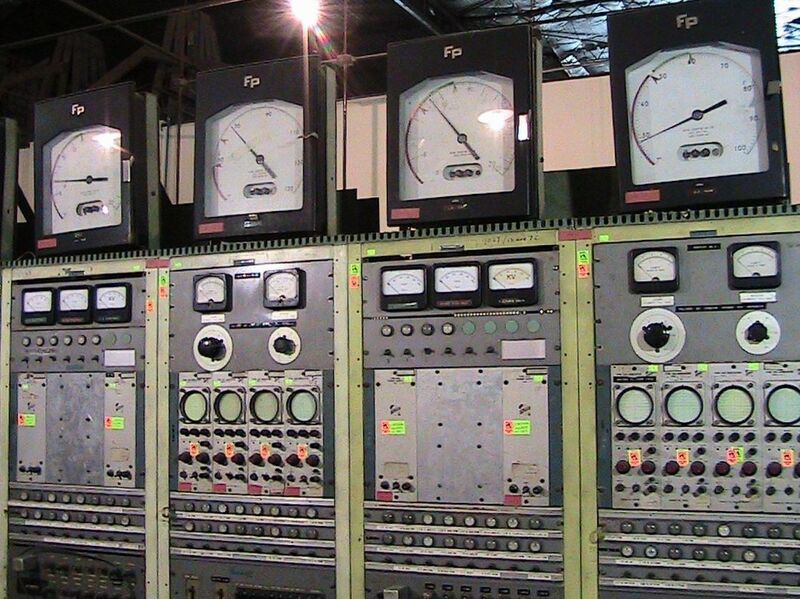 Of benefit to whom[]

It is hoped that the videos and the articles in which they are embedded will be of particular interest to school-leavers contemplating a scientific career, and others with an interest in science or, for example, more generally in the development of Peru. Scientific research is not a luxury. The thousands who have since the 1960’s worked, studied at, or “passed through” Jicamarca form an important source of expertise for Peru. The radio observatory is one of Peru’s hidden treasures which all school-kids should know about. See also "The peruearthquake.com collaborative (knowledge sharing)project". http://peruearthquake.wikia.com/wiki/Category:Journal_of_Peruvian_Studies

Summary of hypotheses and controversies in this/these field(s)[]

Abstracts of and/or links to other articles[]

The joule is the derived unit of energy in the International System of Units. It is defined as - One joule is the amount of energy required to perform the following actions: The work done by a force of one newton traveling through a distance of one meter; The work required to move an electric charge of one coulomb through an electrical potential difference of one volt; or one coulomb volt, with the symbol C·V; The work done to produce the power of one watt continuously for one second; or one watt second (compare kilowatt hour), with the symbol W·s. Thus a kilowatt hour is 3,600,000 joules or 3.6 megajoules; The kinetic energy of a 2 kilogram (kg) mass (m) moving at a velocity of 1 meter per second (m/s). The energy is linear in the mass but quadratic in the velocity, being given by E = ½mv², energy (E) is equal to 1/2 of mass (m) multiplied by velocity (v) squared.

The ionosphere is the uppermost part of the atmosphere, distinguished because it is ionized by solar radiation. It plays an important part in atmospheric electricity and forms the inner edge of the magnetosphere. It has practical importance because, among other functions, it influences radio propagation to distant places on the Earth. It is located in the Thermosphere.

This is an article in the "academia" domain. See the OJPS page for a list of categories.