If anything looks wrong, improve it - directly onto the "edit" page. The existing page will be archived "as is". Your changes will appear on a page "on top". If you want to go back to the original you can do so at any time. Remember to use the preview button to check your revisions before saving.

Workshop: Nostalgia isn't what it used to be . . . Edit

It's even better with videos, photos, music, webcams, etc! How to insert an image and a caption 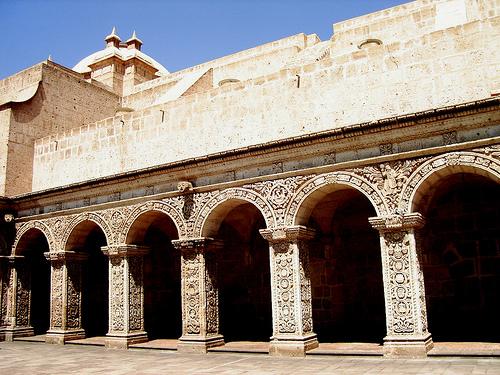 The cloisters of the Jesuit Church in Arequipa, Peru. From the wikia archives.

For Peruvians abroad there are several composers and singers who have universally “touched the chord of nostalgia” and produced what could be considered unofficial international anthems of the diaspora*. César Alfredo Miró Quesada Bahamonde, better known as César Miró(See footnote) (1907-1999) created the nostalgically beautiful “Todos vuelven a la tierra en que nacieron al embrujo incomparable de su sol . . ." (For other verses see below). The best known version,(see this blog for an example of how Peruvians feel about it) perhaps, is that of Jesús Vásquez and Victor Dávalos.

She had (Jesus can be a “she”, in this case María de Jesus, and Maria a “he” in Latin America e.g. [José María Arguedas]) previously recorded “Todos vuelven” as a solo piece*. Victor Dávalos was from Arequipa in the South of Peru, and formed part of the famous Los Hnos (Brothers) Dávalos. Alternating between solo and duet in this famous creole* waltz, Vásquez and Dávalos have produced an international masterpiece which reaches the hearts of millions, especially at times, such as now (National Day 28 July and Arequipa Day 15 August . . .), when Peruvians abroad are thinking particularly of their “home” country. A rather more modern version is that of the 1991 New Orleans Jazz Festival [[1]] in which Ruben Blades internationalises the song. (3 June 2009 the music video "Todos Vuelven" by the Morochucos has replaced that by Jésus Vasquez - withdrawn by YouTube)

For lovers of/in the Arequipa countryside perhaps more appropriate for the Dia de Arequipa on August 15th, at least for the grey-haired brigade, is Los Davalos singing Rio de Arequipa, (see right). There are a number more that could lay claim to be Arequipa's anthem: Carnaval de Arequipa, Blanca Ciudad or Melgar . . . and no doubt newer songs are already taking over in the picanterias of Arequipa.


Press large arrow once and then twice to play music video. Do not double click rapidly on the image unless you wish to leave this site and open up the YouTube webpages!

Though the video has the title "Chola Arequipena", we have not heard it called that. (Insert an authoratitive note here).

For Peruvians, Chabuca Granda was as great a figure in her time (which is still today for most people) as Flores is becoming today. Occasionally she turned her attention and her skills toward Arequipa. Arequipay is one result. "y" is the first person possessive suffix in the Quechua language - that is "my" in English, but it is placed after the noun, however the video is subtitled "Si Quedaos" which is the historical derivation (but in Puqina / Aymara / Quechua) of the name Arequipa.

Chabuca also gave Peru its own mass and in this version Rafael Matallana interprets the Kyrie y Gloria of Chabuca's Misa Criolla performed at the Concierto de Navidad (Christmas Concert) 1996 in Lima’s main square, in front of the Cathedral.

And whilst we are at the more “highbrow” end of the Peruvian cultural spectrum, it might be interesting to eavesdrop in on Luis Antonio Meza’s concerto performed by Liliana Cino with the Orquesta Sinfónica Nacional del Perú, director José Carlos Santos.

N.B. Two of the most popular U-tubers videos about Arequipa are: (1) Arequipa, Peru and (2) Arequipa (These are the titles used on the YouTube screen)

Footnote 1. James Higgins comments that "the most significant development from the 1930s onwards was the adoption of the canción criolla by Lima’s middle classes, who found in it an expression of their sense of themselves as Peruvians." Writers and intellectuals also took to the canción criolla. "In the 1930s, for example, the writer César Miró, then living in Paris, opted to express his homesickness for Peru through the medium of the vals, composing in the process one of the canonical works of the genre, ‘Todos vuelven’ . . . (Higgins, James. The Canción Criolla, Journal of Peruvian Cultural Studies. http://www.ucl.ac.uk/spanish-latinamerican/resources/CancionCriolla.htm

(This section could be copied / moved to another page / thread related to cross-cultural music; nostalgia etc.) (watch?v=kHGnX4Ojhyc)

In his tour of China, Isaac Stern is quoted as saying that “the easiest way to learn about another country is to meet there other professionals in ones own field”. He proves his point in an extraordinary musical dialogue that he developed with the musicians of the Central Philamonic Orchestra of Beijing. To turn to another trans-cultural encounter Yo Yo Ma, now one of the globe’s most accomplished cellistswas born in France of a family with Chinese roots, but with US citizenship. Together with Daniel Barenboim and Edward Said they founded the East-West Divan (Arab-Israeli) Orchestra which has done much to show how music can bring cultures together (To tie Yo Yo Ma into the Latin American context see the Finale). Yo Yo Ma tugs not only at his cello chords but also at out heart-strings, reminding us of the cello concertos performed by Jacqueline Du Pré.

Finally let’s reverse the question? If you have some English roots, which (classical) piece of music is significantly nostalgic for you. For many Elgar has provided the key pieces. The First Movement (Adagio - Moderato) of the cello concierto played by Jacqueline Du Pré and conducted by her husband Daniel Barenboim now has almost iconic status.

Return to sequence PERU 3000BC to 1963 after this excursion into Arequipa and Palestine, etc! Caral slides for workshop editing.

The words of “Todos vuelven”. (The chord markers have become displaced in transferring this file from the "scratchpad". Original still in place: http://scratchpad.wikia.com/index.php?title=Arequipa_Peru:_nostalgia_y_m%C3%BAsica&action=edit )

Finale: Yo Yo Ma and a Latin American interlude

Retrieved from "https://academia.fandom.com/wiki/Arequipa_Peru:_nostalgia_y_m%C3%BAsica?oldid=14387"
Community content is available under CC-BY-SA unless otherwise noted.