Start a Wiki
This article has been marked by its First author as being available for formal peer review. If you review this article, add a link to your review in the section below. 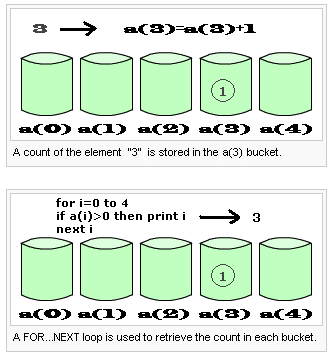 Both sort routines are dependent upon a numerical value being assigned to represent the desired order of the quality being sorted, such as color or size, to index an array variable. One advantage of doing this is that the sort can be performed in sequence or in parallel depending upon the capability of the Computer. When the presence of a particular item quality is detected the variable's index is set equal to the numerical value of the order assigned to the particular quality of the item and the contents of the variable incremented, starting from zero, whenever an assigned quantity is detected. The Check sort uses a "check mark" consisting of a count from zero to one, i.e., a(n)=one while the Rapid sort continues to increment the indexed variable's value each time a duplicate or multiset quality is detected. The Rapid sort functions in the identical manner as the Check sort with the exception that incrementation of the digit is allowed to extend past a value of one by replacing the a(n)=one assignment with a(n)=a(n)+one.

Separation is preformed by inputing the data, while sorting is accomplished by sequentially printing the index of each variable containing a value greater than zero. The incrementation of a binary digit from one to zero is technically counting but neither the Check sort or the Rapid sort should be confused with the Counting sort, even though all three are dependent upon array indexing and array value incrementation to accomplish the sort.

How is the Check sort different from the Counting sort? The Check sort function is identical to a function published by Bentley[4] in which a binary string of digits is used to indicate the presence or absence of a political precinct number in a file by setting all digits in the string of binary digits to zero and then changing the value to one as each precinct reports in. There is no functional deference between Bentley's unnamed sort and the Check sort except for the step which is used to clear the bit array and its defining application[5] and the date of publication. Bentley's sort was first published in 1986 while the Check sort was published in 1996. The Rapid sort[6] preceded development of the Check sort, which is its logical precursor. The Distribution Counting sort[7] is functionally not different from the Rapid sort, except for its defining application of counting and sorting measurement frequencies per statistical interval in a histogram or other statistical distribution, which are technically multisets. The Counting sort can sort items that, in addition to the key, also have arbitrary data associated with each item. The Check sort, like the Rapid sort, only sorts keys. In other words, items to be sorted consist solely of the key; there is no additional data in items[8]. What makes this distinction significant is that the key itself can be data, as in values contained by sets and multisets, which can be counted and sorted.

The Check sort and the Rapid sort are also not the same as the Radix sort which sorts each digit based on the positional significance of each digit in the number.

How is the Check sort different from the Bucket sort? Although an item may be placed into a particular bucket according to the quality of the item to be sorted with the first item serving as the index of the quality being sorted and in effect "marking" each bucket with the quality of the item the bucket will receive, a decision still has to be made for each item which is selected as to what quality the item has and what bucket it should go into. This is true whether the decision maker is a person or an "if/then" statement in a computer program.

The Check sort and the Rapid sort, on the other hand, eliminate the need for a decision for each and every item as to the item's quality and as to which bucket the item will go into. The only decisions required are the initial decisions as to the order of the index that will be assigned to a particular quality of the items to be sorted. Thereafter the contents of the variable which is indexed will only be incremented. When all items are processed the array index can then be reset to zero and incremented sequentially to the number of qualities assigned. If the indexed contents of the variable is greater than zero it is decremented and the value of the index listed or printed, rather than the contents of the indexed variable being listed or printed.

The Rapid sort functions in the identical manner as the Check sort with the exception that incrementation of the digit is allowed to extend past a value of one by replacing the a(n)=one assignment with a(n)=a(n)+one.

Retrieved from "https://academia.fandom.com/wiki/Check_sort?oldid=12904"
Community content is available under CC-BY-SA unless otherwise noted.