TRANSITION – The decline of Chavín and the rise of the Lima Culture: HuallamarcaEdit

We are now at 200 BC and have travelled in the series from the beginnings of the city (urbanized existence) through a long stretch of Peruvian history in which the development of monumental architecture, irrigation systems, ceramics and textiles are underpinning more complex social and political organization in the coastal valleys of what is now Peru.

In the previous part of this series we examined the evolution of the archetypal raised platforms – terraced pyramids with the top sliced off, truncated at a point somewhat lower than that of their (later) Mexican counterparts.

This basic form of construction persisted from at least the second millenium BC right up until the invasion by the Spanish. For a building technology to endure so many generations with so little fundamental change is extraordinary.

There were improvements in the quality and precision of the workmanship (for example, Inca masonry) and the colors and lavishness of the artwork. And of course ceramics, textiles and metallurgy would have been winning global prizes. Even as late as 1500 AD, raised and terraced platforms – then known by the Quechua word ushnukuna/usnus – were to be found at important locations whether for rituals, sacrifice, prayer, liturgy, administration or, literally, agrandizement.

To the uninitiated the question occurs: why so little change in this basic architectural form? Or perhaps there was more development than meets the eye. With an article published in the Peruvian Times on June 12, 1964 (see also Part 2 of this series), Peggy Massey marked out the route for us as we revisit the Huaca Pan de Azúcar / Huallamarca via the Hacienda Condes de San Isidro – which is now central to San Isidro – to see how much things may have changed in the nearly fifty years since the article: both in our understanding of the archaeological period that Huallamarka represents and of the significance of such a grand huaca bang slap in the middle of Lima’s most prosperous district, in the still-residential area of what is now home to Peru´s financial services sector.

This part of the series sets out to portray the construction of the huaca Pan de Azúcar / Huallamarca as a turning point in “Peruvian” development. A period which saw the end of the old regime dominated by a stern Chavin-type religion with priest-leaders exacting harsh corporate labor-input to produce Garagay-type monumental architecture – complete with punishment exacted by a divine decapitator ……

…… and the beginnings of an “age of enlightenment” turning out craft-art of sublime and enchanting beauty. Was this fanged being, shown above, a “graven imge” of (one of) their gods from a time when many of the world’s great religions were “logo”-izing or defining an image for their faiths. Compare with the pre-Islamic Zoroastrian faith. Chavin (the central image) and Garagay seemed to mutually influence each other’s imagery, which disseminated over wider areas about 3000 years ago. In Chavin, the use of the San Pedro cactus (left in image) indicates a possible link with religious ritual, while much of Moche art is related to warriors.

Since 1964, when Peggy Massey wrote her article: 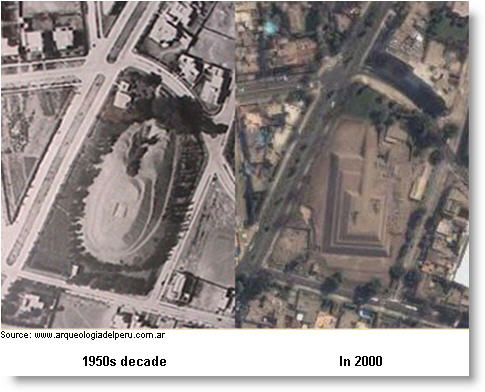 Huallamarca is the third archaeological site on our tour and at last things here were on the move. The first stage was built about 2200 years ago. We are now in a period of transition from the first archaeological horizon –in which “Chavinoid images” are found disseminated over a wide area– to the “early intermediate” period.

What is a “horizon” in (Peruvian) archaeology? One derivation is from the use of the word “horizon” in geology, where it means “any of the series of distinctive layers found in a vertical cross section of any (well-developed) soil.”

So if we dig down in an area that has been occupied by different cultures over different periods we might expect to find layers with their characteristic remains for each period. The same layer(s) might then be expected to occur in archaeological digs in other zones, thus indicating one culture disseminating its pottery and other durable remains over a wide area. (See also Need more reading or viewing? below.)

A hypothesis that perhaps is more (mere) speculation is that humankind was or had been in thrall to an overarching religion that has a cruel and tyrannical undertow/strand. At last the yoke is lifted somewhat around the Huallamarca period, which provides the conditions –both necessary and sufficient– for the evolution and take-off of the Lima culture that follows.

The Peruvian Times in 1964 carried the Peggy Massey article over two pages (pages 4 and 6). And page 5? Just to put her article in some sort of time frame, that was a full-page advertisement for Braniff Airways – remember them? Fast forward forty-five years to Gazeta Cultural Vol 37 April 2009, published by the Instituto Nacional de Cultura (Peru’s “National Trust”). The name of one man links the two publications: that of Arturo Jiménez Borja

The Gazeta Cultural carries this short announcement about an exhibition that honors his achievements as the savior from the urbanizing-bulldozers of this Huaca, now more rightly called Huallamarca. The name signifies “Temple of the Hualla city/area” and the words have both Quechua and Aymara roots.

In the course of her journalism, Massey developed a deep appreciation for the archaeology, and history in general, of what is now Peru. And she also developed an admiration for “Dr Jiménez Borja, indefatigable archaeologist (in time spared from his duties at the Hospital Obrero in Lima), authority of renown and restorer of such places as Puruchuco, Cajamarquilla and Pachacamac.”

If you also speak or read Spanish, the world is your oyster and if you are still not clear about, for example, the Chavin Horizon, you could do worse than check out “the best YouTube video on Chavin” (in Spanish). I do not usually give references to books (unless they are archived in Internet) in English as these for many readers in Peru are difficult to access, nevertheless the Zotero bibliography (below, in the index) is a goldmine and additionally gives you the Canning House Library reference (2 Belgrave Square, Hyde Park Corner or Victoria stations) – if you happen to be in London! Your favorite reading or your own publication not in Zotero-Perustudies? No problem. Just register and pop it in! You will be doing immeasurable service to the advancement of knowledge.

Part 5: The 500 years that follow lay firm foundations for a Lima culture based on changes in ceramics and textile craftsmanship and in water technology. Was there also a liberation of the human spirit and a significant change in the organization of human society? This part looks also at the remarkable output of portraits (in pottery) from the contemporary Moche culture to the north.
Retrieved from "https://academia.fandom.com/wiki/History_Series_4:_decline_of_Chav%C3%ADn,_rise_of_Lima_Culture?oldid=11468"
Community content is available under CC-BY-SA unless otherwise noted.