READING THE PAST, RIGHTING THE RECORD Edit

The sixth in a series on Peru’s history, incorporating stories from the Peruvian Times archives, as well as links to videos, audios and other external sources to provide a rich background of information. Part 1 The Dawn of Urbanization ; Part 2 Tour 3000 BC to 500 AD ; Part 3 Monumental Architecture ; Part 4 Transition; and Part 5 The Pucllana Period.

A simple visit to the Pucllana huaca has provoked some simple questions: Where´s the water supply? What language did they speak? What did their clothes look like? Did they write? We are at 200/500 AD and there are no wheels on our wagons. Although we start at Pucllana, this part also looks further ahead.

No wheels on our wagons

This part of the series is about writing and language. Sooner or later we have to grapple with the thorny issue of the four W’s: writing, wheels, wagons and water. In many histories Quipus and Quechua seem to be bundled – if writing and linguistic histories are included at all – with the Incas during the so-called late horizon period. Yet here we are in an early part of this series at around 500 AD, the later phase of the “Pucllana or Lima Culture period” tackling head-on these vital and problematic topics. Sometimes talking about writing is just taboo – brushed under the carpet.

Either way, no advanced civilization, it had been contended, could exist, or even had existed, without certain key essential ingredients, including the four W’s. Yet very early western Peru had none of the four: no wheel and hence no wagons, no writing and very little water – except for the year of El Niño, when, in a flash flood with multiple huaicos or mudslides, whole cultures could be extinguished. Nor did the area which became the Virreinato del Perú (the Peruvian Vice-royalty from 1532) have ceramics before 1800 BC, as has been noted.

To an extent the problem of an adequate water supply was, for normal periods, solved by the development of canal systems and other methods of irrigation ( see Part 5: Nasca genius). However, if droughts were extremely severe and prolonged, the upstream feeders failed and civilizations collapsed – see Shimada and also Binford. Water is treated as a separate and crucial topic in the next episode (Part 7).

The whole wheel issue depends, ironically, on a semi circular-argument. Picking up on what a reader wrote as one of the responses to Part 2.

Some mysterious, undisclosed event took place around 12,000 years ago in North America that wiped out horses, camels and like species, depriving our ancestors of animals that could carry or pull significant burdens, those that made Asia, Europe and Africa so successful. That event cost the American Native everything in the 1500s of the present era. The horse made the use of the wheel a must and it has been the most important instrument of European domination. Had Paleo Native America had horses human history would be the other way about.

The Mysterious Event was actually an asteroid blowing up over what is known now as the Great Lakes. It wiped out the Clovis culture, all the mega-fauna & likely vaporized the majority of the glacial mass of North America. It was an event that wiped out nearly every culture of the world – that was kicking around any coastal area – because it raised the oceans 150+ ft at minimum.

OK, so no ‘orses, no wheels, no wagons, no heavy or bulk trade . . . but the early civilizations had trains: llama trains and even when the wheel came along, llama and (later) mule trains persisted as the heavy goods transport of choice up to even the present day in the notoriously difficult terrain of the Andes. (See Peruvian Times re ship transported from the sea to Puno on muleback: how was it done?)

So irrigation technology was invented and wheels and wagons were not needed. This leaves Writing as the remaining conundrum.

Why taboo? Writing, anthropologists and civilization

One of the biggest outbreaks of “virtual intellectual warfare” occured when the famous French anthropologist Claude Lévi-Strauss challenged the established view regarding distinctions between the civilized, the primitive and “people without writing.” However, is the advent of writing really the watershed between some form of civilized conduct or not?

Lévi-Strauss in “Tristes Tropiques,” (sometimes translated as “A World on the Wane”) and “La Pensée Sauvage” (1962 The Savage Mind) sets out to show that there is little distinction between civilized and primitive societies. Mr. Lévi-Strauss preferred to call the latter, often dismissed as groups of savages, “societies without writing.”

Claude Lévi-Strauss is also quoted as saying that “The only phenomenon with which writing has always been concomitant is the creation of cities and empires, that is, the integration of large numbers of individuals into a political system, and their grading into castes or classes. It seems to have favored the exploitation of human beings rather than their enlightenment.”

The oldest writing in the world

Around the time Caral was being constructed, inscriptions on clay tablets in Iraq (Mesopotamia/Sumeria) - called Cuneiform writing – were creating perhaps the first writing in the world. This tablet, left, comes from the very oldest period, that of Late Uruk[ix ca. 3400-3000 BC], which is approximately the time when the Norte Chico area of Peru was founding its first “towns.” The writing was used for tallying – keeping account of things – and for administration, at least at first. The role of writing, for example, in restructuring thought came later. In Peru the early khipus were also capable of doing tallying.

Quipus and Quechua at the Cambridges – most recent academic research

When I had said that I was busy writing an article on pre-Hispanic writing systems in Peru, a colleague cheekily suggested that “Oh well, that won’t take you long then.” This type of remark in academic circles passes for wit.

However, the intellectual landscape has changed dramatically over the last few decades and today there are a number of research projects in early Peruvian language history and writing. Some are particularly well-funded and two involve Peruvian universities in collaboration with the two Cambridges: (1) At Harvard University, Cambridge, Massachusetts, Gary Urton is leading a project that assembles in one computerized database a large number of khipukuna / quipus ready for analysis. The khipu (quipu in the Spanish orthography, kuna is the pluraliser in Quechua) is the early knotted-string recording device. The photo above is of one example. Already the project is both widening and deepening our knowledge of the khipu. At (2) Cambridge, England, in collaboration with the Universidad Católica in Lima, the accent is on using linguistics to aid the archaeologist – with some fascinating results.

Initial focus of expansion of the Quechua language(s)

From about 500 BC to 200 BC the Chavín culture and cult exerted an influence throughout what is now northern and central Peru during the period which is called by archaeologists the early horizon. It is likely that at that time one language – a lingua franca – acted as a vehicle for this cultural expansion and that this language was an ancestor of the Quechua I spoken in northern Peru

Thus the expansion of early Quechua probably predates, for example, the time that Alexander the Great was taking the Greek language to the East and extends to the time that the Romans were spreading the use of Latin into Northern Europe, including Britain, around and after the time of Christ. However, the expansion of the area of Chavin influence and hence that of early Quechua appears to have come to a halt at that moment for reasons we do not truly understand, and of course it is assumed that neither the Greeks nor the Chavin knew of the existence of each other.

However, there is a half respectable theory (i.e. published in New Scientist) that Atlantis was located somewhere in or near Lake Titicaca or the Uyuni salt flats or . . . Could Chavin be considered a candidate for ‘Greek rumours of a great civilization to the West’? Is it coincidental that a geographical expansion in the use of Classical Chinese occurred around this time? (Yes).

Subsequently in the South of Peru the Nazca culture was spreading its influence up towards the sierra. It is likely that their language was beginning to serve as the linga franca for the area, forming the basis of early Aymara. This language was thus the vehicle for the ‘Nazquización’ of the sierra. Later – from about 500 AD - the Huari (Wari) people extended the use of Aymara throughout the south of Peru, including the area of Cuzco. By 1000 AD the language map would have looked something like that in the map.

By this time the cult centre for Chavin-style worshippers may well have been located at Pachacamac on the Pacific coast. Previously, it had been thought that Quechua had “originated” with the Incas, who had subsequently, through a process of conquest, imposed the language on Pachacamac. Now it is thought highly probable that Pachacamac not only was influenced culturally and religiously by Chavin but shared the same language. On balance it seems that the use of Quechua, at least as a lingua franca, was adopted later in Pachacamac than Chavin.

(Note: Recent conferences suggest revision of these interpretations. The jury is still out. The “History of Language” and the diagram-map have been adapted from the work of César Itier.)

How many shibboleths can we destroy in this article? 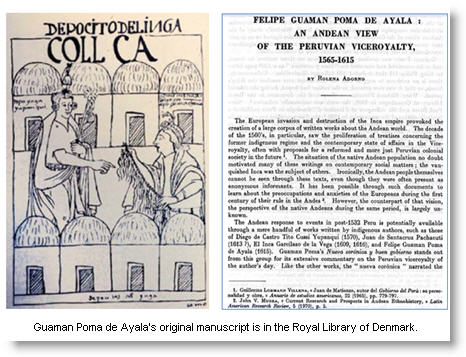 If serendipity is the propensity for making fortuitous discoveries while looking for something unrelated, then Zotero could be considered its handmaid and the Internet its playing fields. With Zotero (for example as a list of relevant internet addresses in your search area) you get a headstart in looking for just the right internet sources. In fact the word serendipity derives from a fairy tale called The Three Princes of Serendip, where Serendip is the Arabic name for Sri Lanka or Ceylon. Serendipity is a surprising thing. And that’s the point. If you stumble on something yourself – when not even looking for it – somehow it could become that bit more significant, as doubtless Columbus found in the years following 1492. If you are not already into Zotero read about it here.

If writing had been a “scarce commodity” in the Pucllana period, water was another: water has always been western Peru’s number-one scarce – but ironically sometimes too abundant – commodity. There had been varying years of a desert climate and one of “mud slides”. But by about 200 AD the Lima culture was about to flower, watered by a growing network of irrigation canals – one of the hiddenwonders of the Rimac valley and estuary. Where were these canals? Can we see them today? When visiting an early archaeological site ask the guide: where was the canal, river or water supply?

Links to the previous articles in this series found in the Journal of Peruvian Studies: Part 1 The Dawn of Urbanization; Part 2 Tour 3000 BC to 500 AD ; Part 3 Monumental Architecture ; Part 4 Transition; and Part 5 The Pucllana Period.

Retrieved from "https://academia.fandom.com/wiki/History_Series_6:_Reading_the_Past,_Righting_the_Record?oldid=11582"
Community content is available under CC-BY-SA unless otherwise noted.