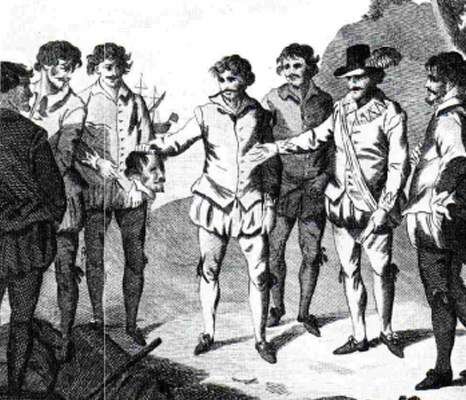 An 18th century engraving. Note the emotional restraint of the illustration. The postures of the men are rigid; their expressions passionless. The execution is for the edification of the witnesses, including the viewer of the engraving. 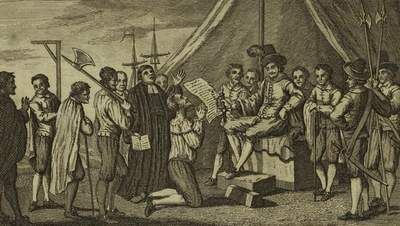 An illustration from Man Upon the Sea by Frank B. Goodrich, 1858. The illustration is obviously based upon June's (above) but note certain stylistic differences. The preacher's body language is more expressive in the copy. The executioner is much more sinister - poised in anticipation of the act. In the original, Doughtie is clearly praying, but in the copy, he looks like he's begging - note the altered hand and knee positions. The positions of the figures on the left are completely changed. In the original, they are clearly participants in the condemnation scene. In the copy, they seem oblivious to the others, absorbed in their own physical contact. It seems an unlikely position for two observers of an execution. A more likely explanation is that they are meant to represent a flashback to Drake and Doughtie's final conversation. Their manner of dress is very similar to that of the two principle figures in the main scene.

The comparison illustrates a shift in the portrayal of the incident. The figures in the first are dignified, their attitudes detached and impersonal. In the second, they are characters in a melodrama. 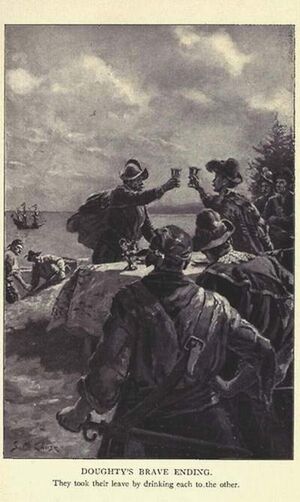 Illustration from The Boy's Drake by Edwin Bacon, 1910. The backdrop, featuring the stormy sky, the grandiose gestures of the characters, even the caption - all create the mood of romantic adventure. Note the attire of the principles - the stalwartly militaristic Drake, the extravagantly foppish Doughtie - far different from the June engraving where Drake is in Elizabethan formalwear, and Doughtie, as the condemned, is dressed humbly, in his shirtsleeves. 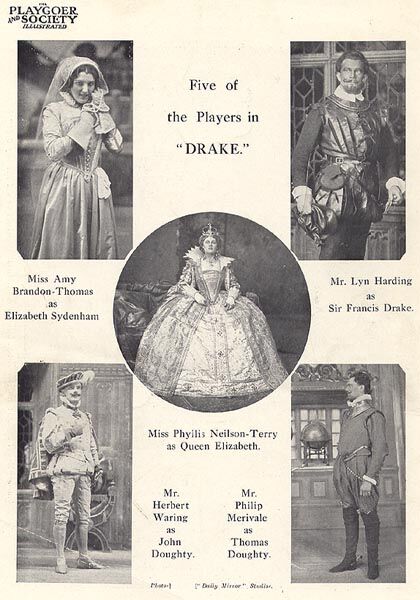 Published in The Playgoer and Society Illustrated Vol VI, No. 36 (1912). This is a promotional illustration for Louis M. Parker's play, Drake. This play oddly inverts the roles of John and Thomas Doughtie, making Thomas the younger, more impetuous brother. Oddly, John is cast as Drake's romantic rival for Elizabeth Sydenham; it is clear from his dress and posture that he is not a suitable choice! Drake is stiff, formal, a pompous hero of melodrama. Thomas Doughtie is cast according to type - dark, impetuous and somewhat sinister in his pose.

In these screenshots from the 1980 movie Drake's Venture, the protagonists clearly conform to the type established in the romantic Drake/Doughtie narrative: Drake (played by John Thaw) is ginger-haired and rugged, Doughtie (Paul Darrow) is dark, handsome and seductive.

This article has been marked by its First author as being available for formal peer review. If you review this article, add a link to your review in the section below.
Community content is available under CC-BY-SA unless otherwise noted.
Advertisement