Edit
This article is a working preliminary draft, NOT yet submitted for peer review. Leave your comments on the discussion page (talk page) or contact the First Author, kmarinas86, at their talk page or by email.

I, K. Marinas, am the founder of my Cyclic Multiverse Hypothesis[1], in which I propose that universe is a fractal, as an alternative to the Big Bang Theory. My idea is not science as of yet, since the vast majority of detailed cosmological data and computing power is outside of my reach. Another reason why it is not science right now is because it is not being studied by staff of a university. This page is not something you can nor should cite for a school project. Meanwhile, I think that my idea lacks the errors of previous alternatives to the Big Bang Theory.

This is not wikipedia. 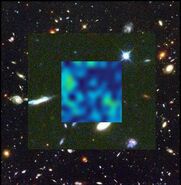 This picture shows distant galaxies, very distant blue galaxies, and a portion of the map of the Cosmic Background Radiation. 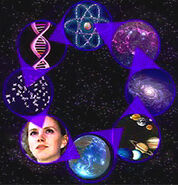 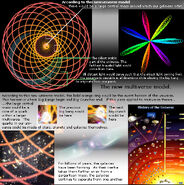 This is an image of the Cyclical Multiverse Hypothesis of May 2004. 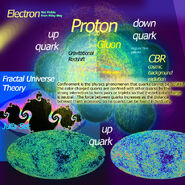 This is an image of the Cyclical Multiverse Hypothesis of March 2006. 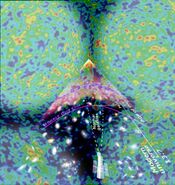 A graphic showing how much of the sky a few TeraQuasars would cover.

A Fractal Universe and Physical Units[]

The Cyclic Multiverse is a self-similiar fractal which might have formed just like a snowflake would. Anything from the curvature of movement to the pattern of a snowflake can ultimately explained with units of measurement.

is equal to the multiple between fractal levels.

compared to those of our fractal's level, but the net charge is less than

.
The reason for this cancellation factor

is that, of the charges located within a given fractal's level, one kind of charge (negative) exceeds another kind of charge (positive) by an amount equal to their total quantity

raised to an exponent of

. The index for the triangular number matching the negative charges is

, while the index for the triangular number matching the positive charges is

.
So, for a similar-in-kind object in our parent fractal's level, the number of negative charges would be greater by a factor of

while the difference is

. In this way, the net charge varies according to the square root of the total charge.
However, more importantly, with the indices of the triangular numbers for positive and negative charges being different by one, the number of parings between opposite charges

is made equal to the number of parings between like charges

. In this way, the attractive and repulsive electrostatic forces, respectively, are balanced for a random charge distribution.

Provided the above is given, the converse is that particles of our fractal's level have

as much charge value as similar-in-kind objects in our parent fractal's level.

Some properties of similar-in-kind objects stay well within an order of magnitude between fractal's levels. These also include so-called "dimensionless" quantities.

The physical properties for our parent fractal's level compared to that of our level are as follows:

What this hypothesis requires[] 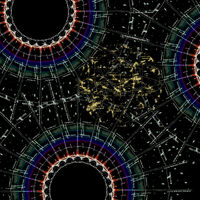 New kinds of collapsed masses called TeraQuasars. These are proposed celestial objects with the proposed mass of trillions of quasars located behind the furthest galaxies and stars we can see in the universe - see Hubble Deep Field.

To explain the Cosmic Background Radiation, the Cyclic Multiverse Hypothesis requires that TeraQuasars are surrounded by an environment which has a similar (if not exactly the same) composition as the one described in the Big Bang theory of the "early" universe. This is analogous to quasars in the centers of galaxies which have a radiation intense environment surrounding them. This environment would be a shell surface that today's cosmologists call the surface of last scattering. However, in contrast to the idea of today's cosmologists - that the surface of the last scattering is a spherical shell concentric to the point of observation - in this Cyclic Multiverse Hypothesis, the surface of the last scattering occurs at ellipsoid-like surfaces of several TeraQuasars - at the same temperature (~3000K) and redshift (~1100). 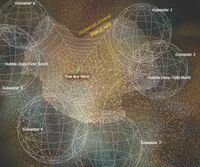 TeraQuasars cannot be thought of as black holes with the mass of trillions of galaxies. That is, because it is required by the Cyclical Multiverse Hypothesis that the TeraQuasars are surrounded by low entropy. This is the same kind of low entropy required by the early universe of the Big Bang Theory. A possible candidate is the Gravastar, which is described as having a very low entropy, in contrast to the high (even maximum) entropy of black holes. Also, with the Gravastar, matter has the ability to bounce back away, a theoretical feature which is necessary in this Cyclic Multiverse Hypothesis. Experiments will be needed to test theories involving Gravastar-like objects. The discovery of such an object would be consistent with this Cyclic Multiverse Hypothesis. 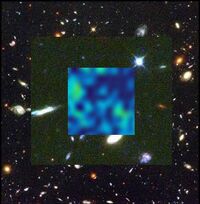 Instead of an inflating singularity that collapses upon itself and reinflates etc., the Cyclical Multiverse Hypothesis proposes that the TeraQuasars are the source of new matter (predominately hydrogen) and that old and new matter can enter and exit the multimillion-light-year thick atmosphere of TeraQuasars. A fractal with a pattern that repeats towards the infinitely large scales and towards the infinitely small scales is necessarily heterogeneous in space at all levels, whereas many cyclic universe models based on the Big Bang Theory suggest that the universe is homogeneous and isotropic at large scales.

More on the size of TeraQuasars[]

Since TeraQuasars would be very large and exist behind a significant fraction of the sky, even more than the Andromeda Galaxy which itself spans 8 moon diameters, they would appear basically uniform and isotropic when viewed through the microwave spectrum. The TeraQuasars could also be accompanied by smaller partners, or GigaQuasars, which would be like TeraQuasars, but many times smaller.

The zoom-out effect caused by hyperbolic curvature of light paths

The zoom-out effect for stars

The zoom-out effect for galaxies

Hyperbolic curvature of light paths is an idea taken from Hyperbolic geometry applied to the motion of light.

Determinant of the hyperbolic curvature of light paths[]

Any proposed zoom-out effect must be able to account for any astronomical observations in order to be valid. One particular observation is the angular speed

of Triangulum Galaxy (also known as Messier Object 33 (or M33)), which has been measured astrometrically using a wide-spread array of radio telescopes called the Very Long Baseline Array[3].

of the galaxy M33 was inferred from the standard premises, after two things: 1) observing a Doppler redshift which give us velocity

, and 2) observing directly the angular speed of the galaxy using an array of radio telescopes separated by many thousands of kilometers. The radius of the galaxy

may be determined by dividing the velocity

by the angular speed

The introduction of distance variable

results from a conjecture that radii of individual galaxies are less than they appear to be. The factor by which

may be defined as the variable

which stands for the exaggeration of distance caused by the zoom out effect. Since the value of angular speed

does not disagree at all with the normal expectations of scientists, the variable

must also imply the factor by which the velocity is exaggerated. Of course, the measured orbital velocity

of masers in M33 is determined via the Doppler redshift equation, of which drastic modification ought to be avoided. Therefore, the new requirement is to divide

deduced from the Doppler formula to get

For quantification, a potential field must be defined.

While elliptic curvature of light paths can be explained using the gravitational potential, the need for a hyperbolic curvature of light paths requires another potential having an opposite sign. Therefore, a new definition of potential energy at the cosmic level will be used by the Cyclic Multiverse concept that implements the effect of a hypothetical Hubble Vacuum Potential Energy (HVPE) that is rooted in the expansion that has been associated with Hubble's law.

is equal to apparent distance between masses

is the Hubble constant, which when multiplied by apparent distance

gives us the hubble velocity.

is the Hubble velocity.

GPE is simply Gravitational Potential Energy which was discovered by Issac Newton.

determines the field potential energy with respect to galaxies.

is the mass subject to this potential.

is the mass subject to this potential.

The goal is to make the gravitational laws of the very large and very small alike:

, the angular momentum, is equal to

, the angular speed, which is the same as

, the following are the initial steps for solving for exaggeration

in this cubic equation, the following solutions for

is the unstable equilibrium in which a galaxy may attract another if it were closer or repel if it was further.

goes from attraction to repulsion (negative to positive

goes from repulsion to attraction (positive to negative

In this case, a TeraQuasar's maximum distance is approached and confinement approaches the point where taking the TeraQuasar any further, via an addition of background radiation (such as a high energy gamma ray from the parent fractal level), would result in one or more new TeraQuasars. Applies for:

at largest radii with respect to TeraQuasars.

In this case, galaxies travel at relativistic speeds with respect to the background radiation emitted by TeraQuasars, and because of this they become massive enough to become seeds which may or may not develop into the next TeraQuasar. Applies for:

at largest radii with respect to galaxies.

In this case, a whole cluster of galaxies would be able to become a "super" quasar simply due to the attraction between them (i.e. without a "Tera"Quasar's influence). Formation of a quasar in this way may be more likely in TeraQuasar systems external to ours which are devoid of life. Applies for:

at smallest radii with respect to galaxies.

, at large radii. This may be the cause of a subsequent reflection off of the lower boundary,

at the smallest radii with respect to TeraQuasars.

(1), for having relevance to Hubble observations (2), for sticking to correct concepts of Kinetic Energy (3), and for always having solutions (4).

For all the following formulas,

is orbital velocity, which in these cases are approximately equal to

Similiarly, the gravitational repulsion defined by the mechanism above becomes a seperating force in the higher fractal level that:

If the universe were eternal, the weak force would have enough time to accumulate the observed difference between the amount of matter and antimatter. The remaining antimatter would be maintained by natural particle accelerators found inside extreme environments such as the center of the Milky Way.

These become the two fundamental forces (i.e. the binding force and the seperating force) of the universe. Both must exist in order for the fractal universe to be eternal and moderate.

Symmetry inside the fractal[]

Energy containment within a fractal level[]

According to the section #A Fractal Universe and Physical Units, similar-in-kind objects in different fractal levels have the same order of magnitude in energy.

Paradox This implies that if an exponential rate of decay, in the form of matter being converted into propagating electromagnetic waves, whose time parameter (or half-life) corresponded to the unit of time for the fractal level of said matter, then this would cause an outflow of energy which would make the relationship between energy and scale factor

4-symmetry (or Quadrant) representation of a fractal level[]

^  Originally, I tried defining the mass in proportion to the distance (i.e. 1E-41 when distance was 1E-41), while using the Schwarzschild radius

as a guideline for how I should start investigating, but then after considering the mass of the universe in relation to a proton, I realized that it would not work that way. I dismissed that a couple times, since that would require redefining the Gravitational Constant for the lower fractal level which is described in units of

. Years later, I still held the assumption that the speed of light would be the same for all fractal levels. Now this assumption is excised, and now objects at smaller fractal levels are predicted to move much, much faster.