These pages are part of a series of open-text [1] journals in the overall field of Latin American Studies. These open-text journals have been proposed as a parallel platform to those fulfilling the role of "traditional academic or scholarly" journals. For a list of journals in similar fields to those of, for example, the Bulletin of Latin American Research (BLAR) see List of Latin American Studies journals. It will be approximately thirty years since we began work on proposals for what became BLAR and it would seem appropriate if the anniversary was marked with the launch of a new "knowledge-sharing platform", given the advances in what has become known as 'Web2.0 technology'. These pages could be seen as a pilot run. Using some of the same software as Wikipedia, this academic publishing wiki-domain encourages open collaborative editing for the writing of academic (hypothesis-testing) articles, exploring ideas, and developing new methdologies and critical analyses. (These journals do not aim to be encyclopedias nor dictionaries. For an online encylopaedic approach to knowledge-sharing see Wikipedia which does have the intent to be encyclopaedic.)

Read about the following by clicking on the link / word: Opentext Journal of Peruvian Studies, Correspoding discussion page for Journal, Minkapedia collaborative education, Journal of Latin American Studies. The pages so far have been developed on the wikia.com platform. The same software could be installed on our (the network or community of scholars and specialists) own site and used without advertising and with greater protection from 'vandals'. Alternatively other collaboratively edited sites could be trialled, for example <http://latinoamericanistas.wikispaces.com/> or the new google site <http://sites.google.com/site/latinoamericanistas/>

Following the opening description of the exhibition, please add to or expand upon the themes, ideas, concepts, threads, leitmotivs or hypotheses which could be explored.

Exhibition of the Paracas cultureEdit

An impressive exhibition of the Peruvian Paracas culture has been brought to Paris. Arguably the most important exposition of Peruvian art[2], archaeology and anthropology [3] taking place this year in Europe is to be found in two conjoint temporary exhibitions at the Musée de Quai Branly in Paris. See http://www.quaibranly.fr/fr/programmation/expositions/a-l-affiche/paracas-tresors-inedits-du-perou-ancien/index.html for an online introduction on the museums website. The titles of these mutually supportive exhibitions are (1) Paracas – trésors inédits du Pérou ancien (long-lost treasures of ancient Peru) and (2) Elena Izcue, Lima-Paris années 30. The latter has been curated by Natalia Majluf, Director of the Lima Arts Museum (Peru) and the former by the General Exhibition Organiser, Danie'lle Lavallée who is research director emeritus at the CNRS (French postgraduate research units) and a specialist in the archaeology of the Americas. The exhibition is a blockbuster (in museum terms) and is helping to establish the Quai Branly as one of the must-see Paris museums. Although known principally for its textiles the Paracas culture produced superb ceramics which influenced the later Nazca style. This was disseminated by the Wari (Huari Empire) expansion into much of the area which today speaks Aymara. The beautifully restored fabrics and other works are cerca two thousand years old and come from a culture which was approximately contemporary to that of the Roman Empire in Europe.

The parallel exhibition-within-an-exhibition, Elena Izcue, Lima-Paris années 30, examines the exceptional talents of Peruvian water-colourist and designer Elena Izcue and the "influence of Peruvian and Andean weavings, and particularly (for the purpose of the exhibition) those from Paracas, on her work and the <designs she created for the Paris and then, the New York market. If you can, get to see the exhibition. Check first the Quai Branly website (above). Share your experiences, thoughts and knowledge regarding Paracas, on the exhibition and the influence of Peru / the Andean countries on European design by adding text and other media to this article. Click edit or write comments on the discussion page: click discussion. To do this go to the online opentext version: http://academia.wikia.com/wiki/Paracas. The opentext version provides space for the discussion of other aspects not covered in this short article: Paracas and a museum of migration; tours of the museum for Franco-Peruvians; a new use for Izcue’s El arte Peruano en la escuela; the need for a clearer knowledge of French-Peruvian history and so on. Read more, ask questions, comment, discuss – click here.

The hypotheses or themes to be explored in the case of the Paracas exhibition might include:

Where is the Quai Branly Museum?Edit

The Quai Branly is itself deracinated leaving part of its roots in the Palais de Chaillot (the Trocadero) and (what will become a museum of the immigrant . . .

For an overview of the contents of the exhibition go to the exhibition catalogue and websites dealing with Paracas and/or Pacific coastal cultures. Two low definition images are provided from the cataloge, pending pemission for copyright. 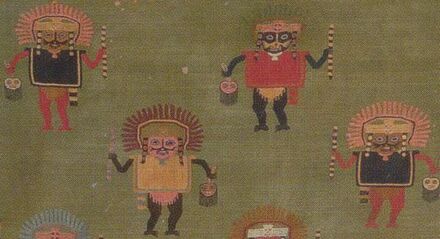 This article examines the influence of Peruvian and Andean weavings, and particularly those from Paracas, on European design - chiefly through the work of two exceptional artists: Anni Albers and Elena Izcue. The article is inspired by the Paracas exhibition at the new Museo de Quai Branly in Paris. The visit to the exhibition took place over the weekend of 16-18 May 2008.

If you can, get to see the exhibition. Check first the Quai Branly website. Share your experiences, thoughts and knowledge regarding Paracas and the influence of Peru / the Andean countries on European design by adding text and other media to this article. Click edit or write comments on the discussion page: click discussion.

(This area of the database for studies re Elena Izcue).

The following note has been added about Paul Rivet (accents on Spanish words omitted).

Last week (21/5/08 - see history tab for author) I wrote about the impressive exhibition of the Paracas culture curated at the Musée de Quai Branly in Paris in collaboration with the Lima Arts Museum MALI- Peru. They had been brought to Paris thanks to the efforts of the embassies, museum directors, curators (Natalia Majluf, Director of the MALI (Peru) and General Exhibition Organiser, Danièlle Lavallée who is research director emeritus at the CNRS) and others involved in the process. But how was it that Paris and particularly the Quai Branly landed this wonderful prize. Remember that there were really two mutually supportive exhibitions (1) Paracas – trésors inédits du Pérou ancien (long-lost treasures of ancient Peru) and (2) Elena Izcue, Lima-Paris années 30.

Perhaps it is not all that surprising given the success of the Peruvian antiquités exhibition two years ago at the then newly restored Petit Palais, which was an exquisite and critical exposition in an exquisite fin de siècle exhibition space. Although at one level Paracas is what it says it is – an exhibition of the Paracas culture and primarily of its textiles, at another level it is a tribute to and showcase for the strength of Franco-Peruvian cultural relations. The parallel Elena Izcue, Lima-Paris années 30 exhibition points to the importance of individual artists, intellectuals and others in forming the international bridge between France and Peru. It is certainly true that lying behind the strength of Franco-Peruvian relations has been a history of strong personal friendships reinforced today by the family connections of the many Peruvians living in France. During the dark days of Nazi occupation (1940-44) and the difficult post-war recovery one particular set of friendships was catalytic: that between Luis E Valcarcel, Paul Rivet, Luis Bustamante y Rivero, and Jose Maria Arguedas. Valcarcel writes in his memoires (p. 320) :

The subsequent pages (320-323) in Valcarcel’s memories go on to spell out the details. Rivet founded the Musée de l’Homme (museum of mankind / of anthropology) in the Trocadero building in Paris in 1938. A member of the French Resistance he escaped to South America. Following the liberation Paul Rivet built up the museum – one of the precursors of the Quai Branly - into one of the best anthropological museums in Europe. Rivet was a great scholar publishing the first edition of the rediscovered Guaman Poma de Ayala. His Historia de la Cultura Antigua del Peru 1943/48 was speculative about the origins of humans in South America (Australia, Melanesia) and this perhaps damaged his reputation. It was followed by his twenty-year magnum opus Bibliographie des langues aymara et kichua. In 1957 he returned once more to Peru “a despedirse”.

Valcarcel had been Minister of Education (7/10/45) and one of the leading voices of the indigenista movement and Arguedas his advisor in matters of culture. President Bustamante and his prime minister Belaunde (Rafael not Fernando) were “Arequipa liberal-conservatives”. They were introducing “post-war constitutionalism” and for a while the process of including indigenistas (Valcarcel) and the indigenism of Arguedas into a deeply racially divided society took a few faltering steps until halted by a military coup. This was the short golden period when Rivet also, reinstalled as director of the Museum of Mankind in Paris, and also a representative in the post-war government, was building up the collections in Paris. Rivet’s substantial library found an institutional home not in the Paris museum-library but in the Peruvian National Library in Lima – to this day there remains a hole in the Musee de l’Homme’s collection. There is now also a further loss of materials to the Quai Branly.

Paul Rivet was one amongst many admirers of Peru that set up strong institutional links with cultural organisations in that country. Others have “stood on his shoulders” or worked independently. The full story is yet to be told: adventure, romance, and discovery are some of the key words. But whatever the motives, France has an infrastructure, collections and other resources to provide the cultural education for its relatively new Franco-Peruvian population.

For full text and photo go to http://aprendiz-de-brujo.blogspot.com/2007/06/natalia-majluf-el-arte-peruano-no-est.html

Note ~ The intersection of art and anthropology museumsEdit

Ref <http://goldwaterlibrary.typepad.com/rgl/2008/02/the-intersectio.html"> See also Watsonline in google. The most recent issue (no. 52, autumn 2007) of Anthropology and Aesthetics is dedicated to the theme "Museums -- Crossing Boundaries." The articles were originally presented at a conference held at Harvard University in April 2006, hosted by the Harvard University Art Museums (HUAM) and the Peabody Museum of Archaeology and Ethnology.

In the opening editorial Ivan Gaskell and Jeffrey Quilter set up the questions that the papers propose to answer:

We consider the things people make -- artifacts -- according to various disciplinary conventions, including those of anthropology, archaeology, art history, history, philosophy, and sociology. What are the relationships among these disciplines in respect of museums, the scholarly institutions that research and present artifacts? The various types of museums -- of art, anthropology, history, natural history, and science -- have largely operated in separate spheres. Increasingly, the rationale for their institutional boundaries is coming under conceptual pressure. In particular, changing ideas about class, race, ethnicity, and culture, in part generated within museums themselves, challenge the boundary between art and anthropology museums. How might art and anthropology museums, while sustaining their disciplinary commitments, find ways of sharing not only ideas but their collections?

For a discussion of some common questions regarding wikipedia and wikia-type documents, see J. Wales (wiki founder) at http://fora.tv/2007/07/18/Wikipedia_Founder_Jimbo_Wales?gclid=CImX-dSByZMCFQyD1QodpEC7jw

Retrieved from "https://academia.fandom.com/wiki/Paracas?oldid=14352"
Community content is available under CC-BY-SA unless otherwise noted.