It is not often that Peru, the United Kingdon and monkeys are mentioned in the same breath. However on the occasion of the Congress of the International Primatological Society 2008 in Edinburgh we have visiting the UK this week Fanny-Maria Cornejo Fernandez from the Museum of Natural History of the Universidad Mayor de San Marcos, Lima. Fanny's field work and her presentation at the Congress dealt with "Aspects of the Ecology and Behavior of the Yellow Tailed Woolly Monkey (Oreonax flavicauda Humboldt 1912)" This monkey is particularly endangered and it is worth spending time and space here looking at Fanny's work. The habitat of the monkey is the eastern slopes (the Cloud Forest) of the Andes in the Chachapoyas-Tarapoto area and the specific field-work took place at Abra Patricia – Alto Nieva in the Department of Amazonas (see red arrow). 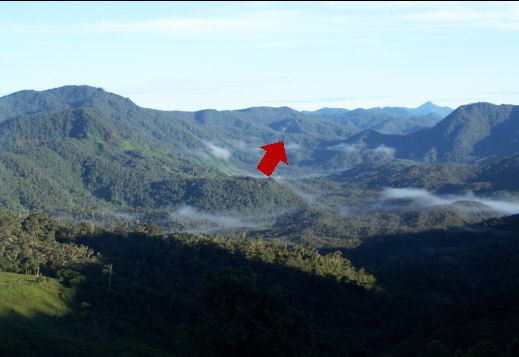 The yellow-tailed woolly monkey, Oreonax flavicauda, endemic to the northeastern cloud forests of Peru and one of the twenty-five most endangered primate species of the world, is still poorly known. This data gap mainly reflects the inaccessibility and difficulties of the area within its known distribution. In order to better assess its state of conservation it is important to have knowledge of its basic ecological traits. Between March and June 2007, a preliminary study with the aim of assessing the ecological and behavioral characteristics of this species was held in the private reserve Abra Patricia – Alto Nieva in the Department of Amazonas, Peru, with a size of 2065 ha. For this purpose, a habituated group was followed for a total of 177 hours distributed over 39 days. The group was composed of 10 individuals, but was observed to split up into subgroups of variable size for one to four days, and separated by 200 meters or more. Home-range size was estimated at 69 ha, and the daily range was less than 1 km. A fission-fusion social organisation is suggested, and the small daily range and home range probably reflect the predominant folivorous habit of yellow-tailed woolly monkeys. The small space requirements of this primate probably allowed it to survive the enormous habitat loss that occurred over the last three decades since its rediscovery. The known distributional area is very fragmented; therefore, the risk of isolation is great. More studies to complement these results and to better understand the requirements of this species are needed.

Although the monkey has a potential habitat of 7,240 km2 (De Luycker and Heymann, 2007), habitat is being eroded because of the activities of mining companies, wood extraction, expansion of pastures & crop lands. The habitat is also under pressure from increasing human population (5% in last 10 years) and from hunting food and for the pet trade. The very curious behavior of the monkey and its dispersion and danger of isolation in a fragmented habitat makes it specially vulnerable.

Retrieved from "https://academia.fandom.com/wiki/Peru,_the_UK_and_monkeys?oldid=7875"
Community content is available under CC-BY-SA unless otherwise noted.