Smallocracy (rule by the supermall) is a philosophy that assumes that very large malls offering all the comforts of a small town offer the optimum way to promote economic freedom, social opportunity, a way of political independence, and security of health.

Before a democratic society can develop, access to natural resources are necessary. When made available, these natural resources must be spent on power and supply chain infrastructure in order to provide a high standard of living to future residents. In highly democratic societies, these natural resources and infrastructure serve the best interests of the people, without distinction to race, gender, or class. Such communities vary from rural, urban, and suburban. Smallocracy proposes a system in which the best capacities of rural, urban, and suburban design are unified.

Rural places offer uncluttered views and pristine natural conditions. They offer the ability to walk directly outside a house an experience natural beauty in person. Under Smallocracy, aesthetics seen from the windows are very important.

Urban places offer car-free access to good and services. Such cities, despite their higher population density, can be more environmentally friendly than suburban places since they usually forced into a limited space, reducing the pollution emitted during commutes. Under Smallocracy, energy savings is made possible with a campus-style transportation system.

Suburban places offer better jobs than rural areas and larger middle-class residences than can be found in the city. Private pools and patios are common in suburban areas. Under Smallocracy, private pools and patios will form on the perimeter of Supermalls and will have ideal viewing conditions of the countryside, beachside, or lakeside.

Vehicles, 1000+ square feet suites, and more can be bought and owned outright. In addition to this, a modifiable basket of durable goods of a prepaid value can be borrowed and kept as long as one wants. For example, one person might purchase the rights (or privledge) to $4,000 dollars worth of computer equipment. At any time, this person may return a computer, monitor etc. and get a different one, as long as they are set below $4,000. Any loss of the fair market value these assets is covered by the supermall's retail sales tax, which brings us to the next section.

Finances for the common goodEdit

Retail sales tax in the supermarkets, restaurants, and clothing stores within the supermall will finance the local government and public goods offered therein. They will also provide public education and the infrastructure that implies, including $1,000 of rights of electronic equipment and instructional training videos for home use. Since there will no need for police cars, fire engines, ambulances, etc. to transport people to medical facilities in the supermalls, the cost of public goods are lowered by a large margin, reducing the costs of public goods.

All education levels in Smallocracy will be vocational. There will be no specific teacher occupation. Instead, children must learn to prove to their parents, then their local community, that they are worth of certain privileges. When children have displayed capacity in fields such a retail, fire, police, and health, they are capable of learning history and finance. After learning the basics of history and finance, they are ready to learn science and higher mathematics. Teaching a child in this order means that children are taught only as far as their minds can grasp. It also teaches children to love and get along with others before one can support them financially and materially. Graded licenses will immediately indicate eligibility for occupation. For example a manager in retail may need to learn the first tier of subjects (retail, fire, police, and health) in order to correctly provide for retail customers and communicate effectively and professionally with public servicepeople.

Senior-citizen retirement in the United States is becoming increasingly mobilized. In addition, the Baby Boom generation, which is among the first to have this privilege has largely grown up with a culture that is family centered. Unfortunately, in a time where the average parent in the United States has less than two children, the fraternal relationships of large families has been withering, which means children are having fewer and fewer closely-related role models. Unfortunately, current public education systems place more social emphasis on past popular figures such as George Washington and Napoleon than they do on the parents and the retail and community service workers. Children are very capable of learning public service work, as can be evidenced from programs such as the Girl Scouts of America. The lack of experience with the public workforce has led to social blindness regarding who to go for assistance. The danger of traveling public roads has prevented physical presence between places of assistance (service areas) and places of need (home). However, when Smallocracy rules the land, children with have greater respect and social wisdom which they can use to prolong the life of senior citizens, as well as reduce the costs of health care.

Each Smallocratic supermall will have an ambassador. In addition there will be three secretaries corresponding to the three tiers of education:

These hubs will be similar to the more residential Smallocratic malls. The difference is they offer places in which technical knowledge, requiring the use of memorization of hundreds of concepts, will be offered to late teenagers and early adults who are capable of increasing the grade of their licenses.

Every three hubs will be connected to a University of Arts and Sports. It is from here that access to conventional highway, air, and rail transportation systems and the rest of the US begins. There is no car rental at Smallocratic societies. Instead, one purchases the private rights to a car, or a groups of cars up to some value. One just goes to the parking lot of one's choice, much like entering one of several car dealerships. A special system proprietary to Smallocractic societies scans one's license, which is then used to activate the car desired. Personal cargo can be kept in the vehicle as long as one wants. To transport cargo between the vehicle and the home of the Super Mall citizen, the use of ice coolers, Rubbermaid containers, and other similar shipment methods may be used. 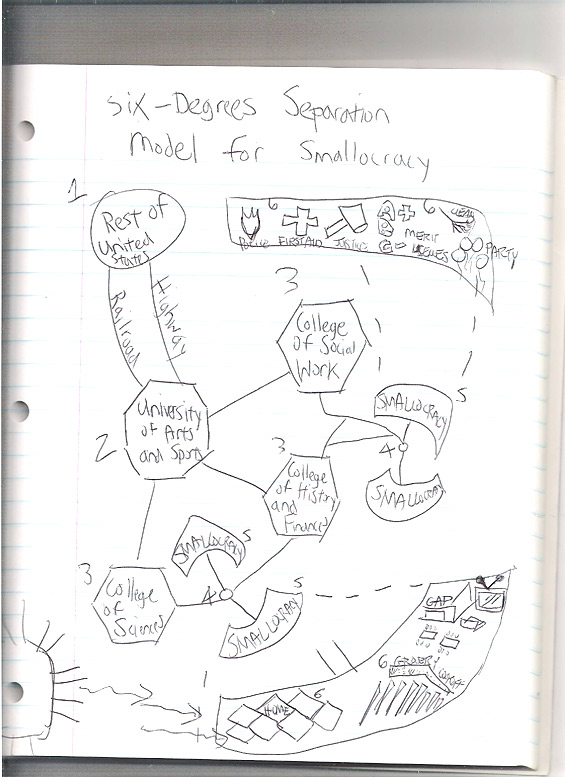 Retrieved from "https://academia.fandom.com/wiki/Smallocracy?oldid=13523"
Community content is available under CC-BY-SA unless otherwise noted.